Twenty years ago, in 1997, Titanic, a historic film made its cinematic debut in the United States. Two decades later, fans are still showing no signs of “letting go”.

Twenty years ago, in 1997, a historic film made its cinematic debut in the United States. Kate Winslet and Leonardo DiCaprio starred in James Cameron’s Titanic–a story of star-crossed lovers set in the ill-fated maiden voyage of RMS Titanic, what is dubbed to be one of the biggest sea disasters of all time.

The world wept and cried with Rose and Jack, who will then become two of the most recognizable movie character names ever known to man in the grand and epic film that broke all records. Two glorious decades, 11 Oscars and over $2 Billion worldwide earnings later, the film remains as one of the biggest epic dramas ever to surface and be enjoyed by moviegoers on a global scale.

Its impact has spawned awards sweep for the actors and the people behind the film, a best-selling original film soundtrack, sequels in the form of one documentary after another, museums, and two of the most respected Hollywood actors of this generation.

Recently, in celebration of the film’s 20th anniversary, Titanic was re-released for a week using the Dolby Vision technology, which revisits iconic scenes from the dedicated quartet, the old couple in bed, the Celtic-inspired original score, and of course, the much-debated Rose-on-top-of-the-door scene. 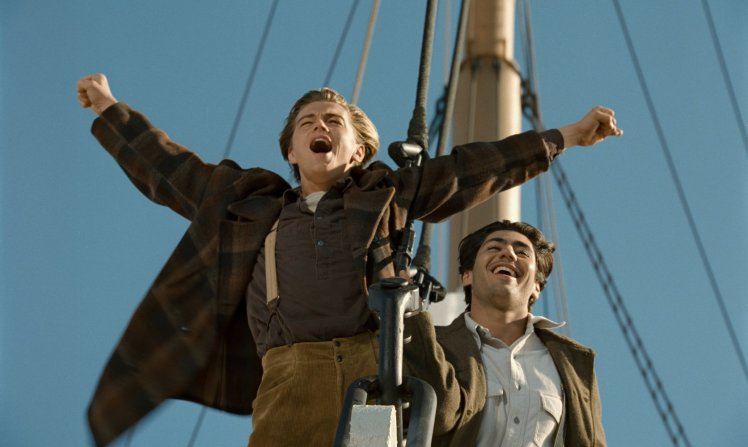 Interestingly, James Cameron had this today when asked about the still hotly-debated physics issue between Rose, Jack, and the door that could’ve saved them both. He told Vanity Fair, “I think it’s all kind of silly, really, that we’re having this discussion 20 years later. But it does show that the film was effective in making Jack so endearing to the audience that it hurts them to see him die. Had he lived, the ending of the film would have been meaningless. . . The film is about death and separation; he had to die. So whether it was that, or whether a smoke stack fell on him, he was going down. It’s called art, things happen for artistic reasons, not for physics reasons.”

As for the Leo-Kate shippers, twenty years later? We are just going to leave this here.