More and more local celebrities turn to available media and channels to mobilize campaigns that aid Filipinos deeply affected by the ongoing enhanced community quarantine enacted by the government. In times of crisis and uncertainty as this, brought by the COVID-19 global pandemic, established and new celebrities take on their respective roles as harbingers of hope and concrete actions directed to those in need.

GMA Artist Center celebrities initially mounted a series of Facebook Live Streams of performers from their own homes spreading a message of oneness in this trying times. Starting out as a simple live streams featuring its rising roster of young stars including XOXO’s Lyra Micolob, Yasser Marta of Bilangin ang Bituin sa Langit, Brent Valdez of Beautiful Justice, and Mirriam Manalo of The Clash, Jeremiah Tangco of The Clash, Kristoffer Martin, and Myrtle Sarrosa.

The succeeding live streams then saw the opportunity to turn this into an act of generosity and kindness from viewers. #HealingHearts was then launched in hopes of raising funds to aid Kapuso Foundation’s ongoing efforts to aid our fellow Filipinos whose means of livelihood have been put to a halt due to the enhanced community quarantine. This was ushered in last March 23 by artists Yasmien Kurdi, EA Guzman, and Julie Anne San Jose.

A #HealingHearts page on ticket2me.net was eventually created where people can donate (P300, P500, or P1,000) to help Kapuso Foundation’s efforts. The artists now include a link to the #HealingHearts ticket2me to incite the spirit of giving.

More than the act of solidarity to raise funds, the series is designed largely to spark hope and encourage people to be strong and positive during these trying times with songs of inspiration and through building connections with supporters in the absence of mall shows, and meet-and-greets.

The #HealingHearts Facebook live streams series is set to continue with this line-up:

GMA Network, through the Kapuso Foundation, continues to mobilize fundraising campaigns and activities through its campaign, “Buong Puso Para sa Pilipino”. For donations, please refer to the details below: 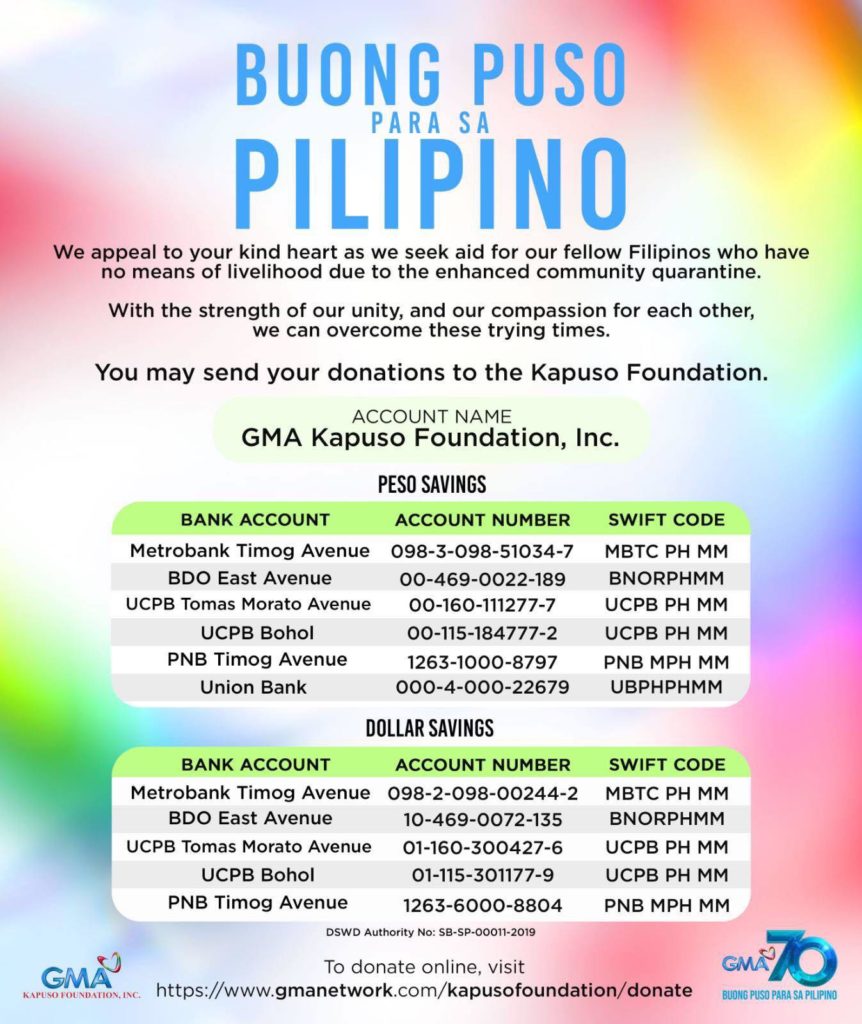